Most of us hate uncertainty. And it’s our dislike of uncertainty that keeps the weather man and economic forecasters employed. But when was the last time you checked your favorite forecaster’s track record before acting on his or her prognostication?

Wrong. And that belief could be costing you money.

Much of the trust placed in professional forecasters is misplaced, especially when it comes to economic forecasts. We’re not alone in our belief. John Cochrane, a University of Chicago professor, describes economic forecasting as inaccurate and financial forecasting as next to useless.1 And he does clarify that his comments pertain to “real” forecasters as opposed to the “clowns” on TV.

Consider the following example. In December of 2013, The Wall Street Journal published the interest rate forecasts of 46 economists.2 All but one predicted that rates would be higher in 2014 — and the other one predicted that rates would be flat. Fast forward 12 months and all of the experts were wrong. Rates actually declined. Unfortunately, forecast errors seem to be the norm among market prognosticators. 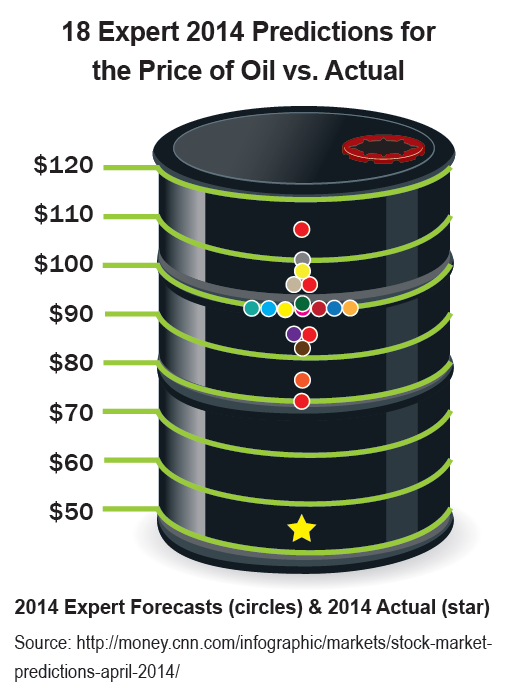 The chart at the right shows the forecasts of 18 investment strategists and money managers — the so-called experts — for the price of oil at the end of 2014. As you can see in the chart the experts were all wrong and the closest forecast was almost double the current price. Only three of the forecasters predicted the direction right (i.e., that the price would decline), but most forecasts were so far off that we’re not quite sure how they stay employed. These forecasts were part of a CNN Money survey taken at the end of 2013. The experts ranked several other market indicators and whiffed them all.

It’s time to think twice before putting your faith in professional forecasts. If you’re wondering why it’s so hard to accurately predict the movement of the markets it may be because market movements are random, or at least that is the idea behind the Random Walk Theory. Random-walk theorists believe that markets are reasonably efficient. An efficient market is defined as a market with many participants and freely available information. Competition among the many intelligent participants leads to a situation where actual prices reflect the effects of all known information. The key is information. Most professional forecasters are all working with the same information, which results in them coming up with similar forecasts.

In order to truly have an edge in making predictions, a forecaster must have information that isn’t available to other market participants. And that would violate our market efficiency assumption.

Why does this matter for you? Because if you listen to the prognosticators (or even believe that you can predict the markets), you will sell when you should hold, or buy what you shouldn’t – and lose money in the process.

The dark side of forecasting is the wealth destruction that can result due to investors moving in and out of the market based on these predictions. So what do you do when the industry experts show less forecasting accuracy than a coin flip? Start flipping coins yourself? No, you stop trying to time markets. And you stop believing that others can time the markets. You have the courage that it takes to ignore economic forecasts from experts with very impressive credentials. Their logic is compelling and their rational seems sound but don’t let that fool you into making an investment mistake that may put at jeopardy your long-term investment goals.

At PFG, we’ll never try and predict the markets or time the buying and selling of your investments. We’ll always give you unbiased advice based on your personal financial situation and long term goals.

Brian HanksHow to Avoid the Dark Side of Investment Forecasting01.04.2016