Congratulations to those who survived the tax deadline and thanks to the IRS for extending the deadline to April 18, 2017! I specifically want to acknowledge Chad Rogers and the rest of the tax team at PFG (Josh, Sara, Kate, Ryan, and Naomi). Most of you who are reading this benefited personally from their tireless work, laser-like attention to detail, and unnaturally high level of ownership. I wish each of our clients could see the inner workings of the well-run machine that Chad and his team have created. We’re always striving to get better, but wow! Good work guys. We’re all better off now that I’m not running that part of our business.

After delivering the final news of how much one client owed to the IRS, he responded via email with this phrase: 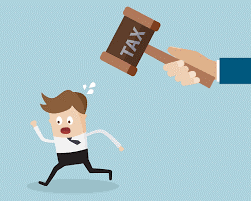 “P.S. I absolutely hate paying taxes, about more than anything!”

This year we found this sentiment to be quite prevalent. Did you feel this way?

On the other end of the spectrum, a dental resident called me in a panic on April 10 saying that he had earned a small income ($24,000) and hadn’t withheld any federal or state taxes. He was scared at the thought that he would owe a small fortune. We quickly prepared his return and I delivered the news that he would get a refund of almost $5,000 due primarily to the Earned Income Credit (gov’t welfare delivered via the tax code). This guy was happy to be an American on that day.

Overall, we too feel our clients carry a very heavy tax burden with many of you paying over 40% of your income (that means you work almost to the end of May for the government, then June through December for yourself). I don’t know what to tell you about this – um, vote?

But, financially speaking, if you could choose to be our client who paid the most in taxes this year ($559,957) or the resident above who would you choose?

Here is the consistent lesson that we have learned over and again: regardless of how you feel about paying taxes, don’t forget that the goal (assuming you’re going to obey the law) is to pay as much in taxes as possible. Sound crazy? The alternative is crazy. Didn’t you just agree that you’d rather be the millionaire who paid $559k in taxes than the pauper student, up to his eyeballs in debt but who paid zero in taxes?

Please don’t misunderstand what I’m saying. Of course we plan to minimize taxes as much as is prudently and legally possible. But if you want to become financially independent, don’t forget that minimizing taxes on your earned income is not the primary goal.

I hate paying taxes too. But unless congress lowers tax rates, here’s to a higher tax bill in 2017 than we paid in 2016.

Stay up to date! Receive a Weekly Message with Financial Tips & Advice for Dental Professionals.